H. Anthony Medley
H. Anthony Medley is an Attorney, an MPAA-accredited film critic, and author of Learn to Play Bridge Like A Boss,Sweaty Palms: The Neglected Art of Being Interviewed, and UCLA Basketball: The Real Story. He is a Silver Life Master and an ACBL-accredited Director and the author of a bridge column for a Los Angeles newspaper.

What does a double of a no trump contract mean?

I was on lead and without a double from my partner I refrained from leading from my club suit.  Instead I led 4th from the KQxx of Hearts.  My RHO made 4, running the six card diamond suit and the AKQ of spades after taking the Ace of hearts, finally conceding the last three tricks.
Here are the actual hands: 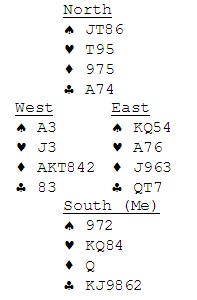 When I discovered that my partner had the Ace third of Clubs I asked her why she didn't double for a Club lead (Declarer held Qxx).  If I lead the Eight of Clubs (4th from my longest and strongest suit), she takes the Ace and returns through opener’s queen and we take the first six tricks.  She responded that a double would have asked me to lead a diamond, dummy's first bid suit!
This seems to be a common misconception among players even as experienced as she.  In fact, a double of a 3N contract by the bidder's partner, when bidder is on lead, asks for a lead of bidder's suit.  The absence of a double implies that bidder should not lead the suit he bid.
Here are the rules for lead directing doubles of 3 no trump contracts:
1.   If your partner (who doubled) has bid a suit, lead her suit;
2.   If you have bid a suit and your partner doubles, lead your suit;
3.   If neither of you has bid, you should lead Dummy's first bid suit unless you have a better lead in your hand, so you can use your judgment;
4.   If you have both bid, use your own judgment, but if your suit isn't terrific, lead partner's suit;
5.   If no suit has been bid by opponents and neither of you has bid, your doubling partner is asking for an unusual lead.  She probably has a long running suit, so you should probably lead your shortest suit.
Posted by H. Anthony Medley at 12:12 PM